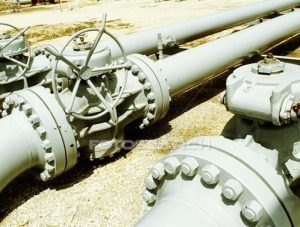 This report contains a worked example of gas trading with gas swing contracts. It shows how a trader could optimize his trading decisions in the gas spot market, while delta hedging the exposures in the forward market: the spot trades maximize the optionality of the contract, while the forward hedges limit the risk.

Click here the report or read the main text here:

This report describes a so-called backtest, performed on two similar TTF swing contracts delivering over the calendar years 2014 and 2015. The analysis assumes that a trader has a gas swing contract with daily flexibility and quarter-ahead indexation. The backtest is a worked example of how a trader could optimize his trading decisions in the gas spot market, while delta hedging the exposures in the forward market: the spot trades maximize the optionality of the contract, while the forward hedges limit the risk.

All these decisions, in spot and forward gas markets, are supported by the KySwing model, a proprietary software product, embedded in the KYOS Analytical Platform. A large number of market players already use this model to value gas swing contracts and to optimize trading decisions. More information about the software is available on the KYOS website www.kyos.com.

We performed the analysis over two TTF gas swing contracts. One of them delivers in the calendar year 2015, and the other one in 2014. The two contracts are similar:

The annual quantity of 216,000 MWh allows a trader to take the maximum volume of gas (2,400 MWh) on exactly 90 days. The value of the contract is maximized when these volumes are taken on the days where the gas market prices have the largest (positive) spread to the contract price.

During a quarter, when the contract price is fixed, the owner of the contract will benefit from increasing market prices; there is a positive exposure to market prices. This exposure can be hedged by selling gas forward in the remaining period in the quarter. The so-called delta hedges are the optimal forward trading positions at a specific point in time which (largely) neutralize the risks from changes in forward market prices.

The exposure to market price changes in future quarters of the year is rather small. Exposure are mainly built up for the next quarter-ahead, as a result of the quarter-ahead price settlements, which gradually fix the contract price. To summarize, for a quarter-ahead indexed contract:

A trader must actively trade in the gas market to realize the full optionality. For this purpose, he should engage in two types of activities:

In short, what happened in both 2014 and 2015 in the TTF gas market: price levels gradually fell, and hence the average contract price was 2.27 €/MWh above the gas spot prices. Taking gas from the contract was therefore advantageous on very few days (53 per year on average). Thanks to the delta hedges recommended by KySwing, this was compensated for by a positive hedge P&L. The total realized P&L of spot and forward trading was therefore close to the expected values.

This chapter shows that a combination of spot optimization and delta hedging ensures that the full contract value is realized. With more frequent rehedging than just once per month, the realized P&L could even be closer to the expectation, albeit at probably higher transaction costs. In the following section we will analyse the trading activities in more detail.

The trading activity evolves along the following main steps:

The 2015 contract serves as an example to clarify each step in more detail. 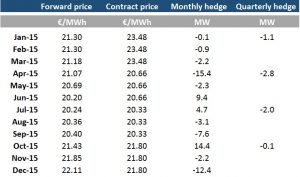 We can make various interesting observations about the delta hedges. First, to put the hedge volumes into perspective, it is useful to know that the maximum offtake of 2,400 MWh per day corresponds to 100 MW. So, with hedges in the range of 0-3 MW per quarter, all quarterly hedges volumes are relatively small.

Third, the hedge volumes are small in the other quarters, because there is virtually no exposure to increasing or decreasing forward prices in Q2-2015, Q3-2015 or Q4-2015. If any of these quarter-ahead prices goes up, the expected contract price rises, but the average market prices rise in parallel.

Finally, the largest hedge volume is actually for an individual month, April-2015. For this month we expect a relatively large off-take: April has a higher forward price than May and (especially) June. As a result, there is a risk that April prices go down and June prices up, which would narrow the April-June spread. Therefore, the delta hedges are negative for April (sell 15.4 MW) and positive for June (buy 9.4 MW). Q3 and Q4 show similar intra-quarter patterns.

As part of the analysis, during each day in January 2015 the KySwing model performs a contract valuation and recommends to take gas from the contract or not. During the whole of January, the outcome is always negative: no gas is taken in January, because the contract price of 23.48 €/MWh is higher than the spot price on each day within the month. At the end of the month:

During February 2015, again no volumes are taken. At the end of February:

During the remainder of the contract period, we repeated the same set of actions. Progressively, the remaining contract value goes down, while the sum of contract profit and hedge profit goes up. Due to the falling TTF market prices, the contract itself performs quite badly, for which the hedge profit compensates. The end result is slightly below the initial expectation, but relatively close[2].

A detailed breakdown of the profits and losses is provided in the appendix. The following graph summarizes the evolution from expected value to realized profit. The sum of the three areas is the total value; initially this is expected value, whereas at the end the only contributor is the realized profit on the hedges and the contract. 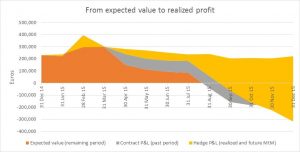 [1] This could e.g. be the date of signing the contract. In our analysis we assume this to be the day before the first delivery day of the contract.

[2] In 2014 the realized profit is actually above the expected value.