Generation economics and the merit order 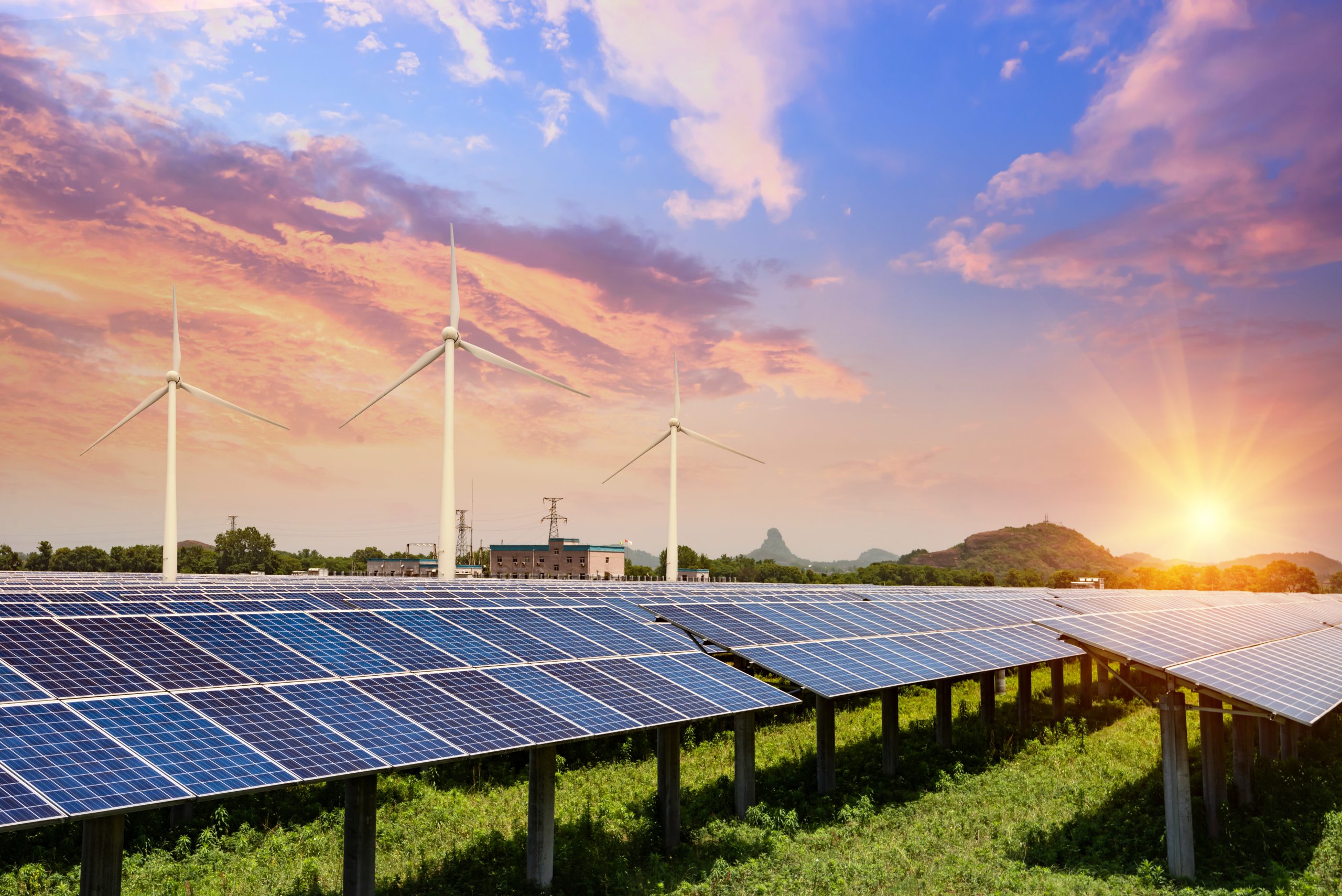 What will be the power price in the future? That is the main question when a PPA is being negotiated, in particular when the price is fixed for the entire duration of the contract. What is important to consider?  Let’s start with the merit order approach.

In the previous article, we have investigated power market prices and forward curves. Exchanges gradually extend the horizon of future trading, on the EEX for example to 6 years out, and soon maybe even stretching to 10 years. However, beyond a certain horizon, typically 3-5 years, there is virtually no market liquidity or transparency, and therefore no good market benchmark for the power price. A potential source of long-term price forecasts are the reports published by power market consultants. Such consultants have fundamental models of the power market to assess future price levels. The fundamental models can also be licensed from vendors, including KYOS, to generate your own long-term price forecasts.

We have three articles about long-term power price forecasts. In this first article we look at the economics of the different types of generation. The merit order is a simplified representation of those economics. In the following article, number 8, we explain in more detail how plants bid into the market, together with energy storage and renewable power producers. This mechanism is simulated in a fundamental market model in order to generate detailed future power price forecasts. In the last article about long-term power prices, we consider various outputs of the model: not only long-term price forecasts, but also forecast capture rates of individual renewable generation assets.

Do you need more than just market data for PPA pricing?

The value of renewable power, and therefore the contractual price in a PPA, can be decomposed into a baseload power price, a premium for sustainability, shaping costs and balancing costs (Figure 1). Both the power itself (baseload price) and its origin from a renewable source (sustainability premium) add value to the contract. The sustainability premium can take the form of additional revenues from schemes such as Guarantees of Origin market in Europe or other renewable energy certificate schemes. 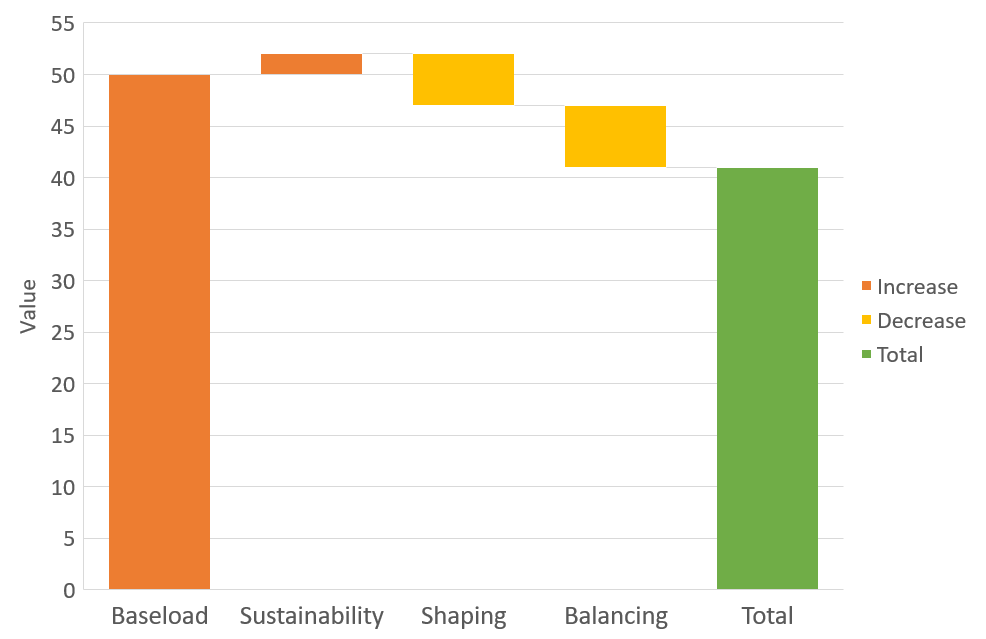 The costs associated with shaping and balancing of renewable power facilities reduce the potential value of a PPA. Shaping refers to the fact that power from renewable sources is not consistent throughout the day. It tends to be produced at the same time as other similar assets, which pushes down the prevailing market price in those hours. Balancing costs are incurred because the amount of power produced will never exactly match the amount forecast on the day before.

A PPA needs to consider each of these value components in turn. Fundamental analysis, also named the ‘merit-order approach’ allows us to forecast the future baseload price and balancing cost. The basic idea is that the power price is a result of supply and demand. In a competitive market, each plant owner bids its supply into the market at a price that makes it just profitable to produce. At any given hour, the plants with the lowest bids produce the needed power. The last plant that is required to fulfill demand, is the price setting plant in the supply stack. Traditional thermal power plants are often the price setters (i.e. natural gas, hard coal, lignite and oil plants). It is not trivial to determine exactly at what prices the plants optimally bid in, because different cost elements and generation limitations play a role.

We can estimate the price level at which power plants are willing to produce by estimating the marginal cost of the different types of plants in a given power market. This marginal cost estimate considers factors such as the cost of raw fuel inputs, operating and maintenance costs, carbon costs and plant efficiency. By arranging these marginal costs from low to high, we create a merit order curve (Figure 2). This process of estimation is described in greater detail in Article 8. 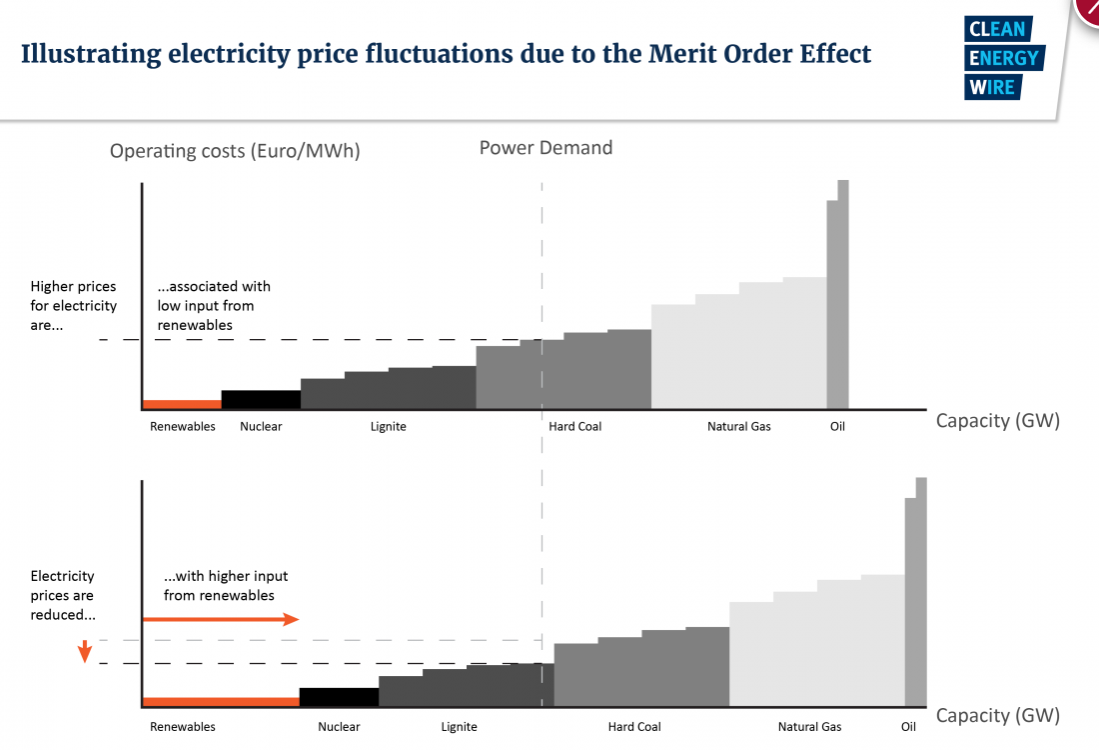 Place of solar and wind in the merit order

Renewable power sources such as solar and wind typically lie at the bottom of the merit order curve. This is because the solar and wind power are largely non-flexible. Solar panels on houses will simply produce whenever there is solar radiation. Larger solar parks and wind farms have a limited degree of flexibility, which is to turn off whenever prices are too low. The solar and wind power production, together with the demand, are mostly treated as non-flexible (intermittent) elements in the power system.

Long-term forecasts of power demand and intermittent renewable generation are often derived from economic and policy scenarios, such as published by the IEA, European Commission, EIA, or national governments. Such scenarios generally stipulate future capacities for renewables and a certain percentage change in electricity demand. Further complicating the picture is the increase in distributed energy resources such as behind-the-meter solar, which displace existing demand for grid power with locally produced power.

Due to the intermittent nature of renewable energy power, technologies that incorporate energy storage, demand response and hydrogen will become more and more important to balance the power system. The effects of these technologies therefore also need to be captured in a long-term fundamental model of the power market.

The power supply consists of at least two other types of generation: hydro power and energy storage. Their behaviour is very different from fuel-fired generation and not easily captured in a merit order. Actually, hydro power is a broad category with very different types of assets. Run-of-river hydro is generally inflexible and just produces when there is a strong current. Reservoir hydro, in mountainous areas, has more flexibility, because the water can be stored for some time in the top basin and released at favourable times. Several factors influence the actual production, such as meteorological conditions, the size of the reservoir, environmental restrictions and power market prices.

Reservoir hydro is often broken down into a non-dispatchable seasonal flow and a flexible dispatchable generation similar to pump-hydro (without pumping though). Pump-hydro is a reservoir hydro with an additional bottom reservoir and pumps to lift the water up to the top reservoir. Production and pumping often follows a day-night pattern. During a full cycle, some energy is lost and the overall efficiency is generally in the range of 65-75%. Without natural inflow in the top reservoir, pump-hydro is therefore a net consumer of energy.

The same is true for other forms of energy storage, such as batteries and fly-wheels. These do not require the geological conditions and space needed for pump-hydro. The initial investment is also lower and response times shorter (i.e. charging and discharging rates), but the storage capacity much smaller. Certain forms of demand response may also be treated as energy storage. For example, cool stores can delay or bring forward their electricity consumption a few hours, thereby temporarily acting as an energy storage. In the future, demand response is likely to play a much larger role in the electricity system with the increased use of technologies such as electric cars and smart meters.

Energy storage cannot be visually displayed on a merit order graph. Bidding energy storage into the market is actually quite complex, because it is not the absolute price level that matters, but the relative differences between the hours. Therefore, market participants must first forecast the potential outcome of the spot market and adjust their own bids accordingly.

An operator of energy storage may place a buy order in hours 2-5 and a sell order in the hours 17-20, if these are expected to be the periods with lowest and highest prices of the day. Simple bids and offers for each hour individually could be to buy at 25 €/MWh (or less) and sell at 40 €/MWh (or more) in these 4-hourly blocks. If this represents a profitable full cycle (4 hours in, 4 hours out), bids in other hours can only be made conditional on the non-execution of the main bids. It might also happen that the 2-5 hour bid is executed in the day-ahead auction, but the 17-20 hour bid not, requiring additional trades in the intra-day market. All this optimization and bidding/trading will happen alongside the exploitation of other revenue streams in the balancing market and ancillary services market.

A role for green hydrogen?

In the future, the production of green hydrogen can also be considered a form of energy storage. The label green applies if the electrolyser, which uses electricity to convert water into hydrogen (and oxygen), is directly connected to a renewable asset such as a wind farm or solar park. If the renewable asset is connected to the power grid, it is economical to produce hydrogen when power prices are low, and sell the green power in the market otherwise.

Suppose that the hydrogen is later on used as fuel in a power plant with a 60% efficiency, and the electrolyser itself has a 70% efficiency. Then the cycle of power production → hydrogen production → power production has a round-trip efficiency of 60 x 70 = 42%. Ignoring any other variable costs, this means that the power price at the time of hydrogen production should be less than 42% of the price at the time of power production in the plant. In fact, hydrogen then acts like a battery with (at most) 42% efficiency. An efficiency of 42% is low compared to that of pump-hydro or batteries. However, hydrogen has other applications as well, both in industry and in transport. The business model of green hydrogen can also be more optimistic if produced without a connection to the power grid. This allows production in remote areas (far off-shore, in deserts, etc), without costly power cables. In the next 10-15 years this is unlikely to happen at large scale, but is probably a necessary ingredient to a zero-emission future in 2040 or 2050.

From merit order to fundamental model

In this article we have reviewed the primary economics of the different power generation sources. There is a role for each in the power system, either to produce MWh’s, provide flexibility, or both. All in all, the combination of sources should be able to fulfill the power demand and balance the system at each possible moment. Finding the right balance between sustainability, i.e. green power, and affordability is a formidable challenge for the future. The merit order provides a useful albeit simplified picture of the economics. A detailed fundamental model uses much more detailed inputs of all relevant assets, and combines those to generate realistic future scenarios of power prices. The next article takes us to the next level, explaining the workings of such a fundamental modelling approach.

To view this article in pdf: Generation economics and the merit order – the financials of renewable power and PPA contracts