This article explains the role of renewable energy certificates, or ‘green certificates’, in the power market. What is the difference between voluntary and compliance markets and what are the price trends? Looking into the future, what can enhance the value of green certificates?

Companies and households are generally willing to pay more for renewable (green) power than for grey power. Over the years, countries have therefore set up certification mechanisms which testify the nature of the generation source for each MWh of power produced.

The certification is often handled by a single organization in the country. This process has gone so far that some countries in the EU nowadays have all major sources of generation certified, whether green or grey, and each MWh receives a Guarantee of Origin (GoO or GO).

If the source of generation is renewable, the certificate is a renewable energy certificate (REC), often referred to as a “green certificate”, but many other names are used as well.

In countries where the purchase of renewable energy certificates is completely voluntary, the value is often low: companies and households are typically willing to pay only a small premium (roughly between 0-2 €/MWh) in order to get guaranteed green power. In countries with a compliance market, the price can potentially be much higher and is an important ingredient in the value of a PPA contract. For this reason, we first discuss such compliance markets.

Figure 1: Value components of renewable power and physical PPA contracts: higher values with a compliance scheme for green certificates due to enforced scarcity for sustainability.

In compliance markets, governments have defined green energy targets which the market has to fulfill. An example of a green energy target is that the share of renewable production in total consumption should be at least 20%. This percentage might increase every year. As part of such systems, generators receive a number of renewable energy certificates for the green electricity produced. In technology-neutral systems each MWh of green power is worth one certificate.

In technology-focused systems the pay-out may be higher or lower than one, either to stimulate specific technologies or to support new capacities more than existing capacities. At the same time, suppliers to end-users have to ensure that a certain percentage of their supply is covered by green certificates or otherwise pay a penalty. The certificates can be traded in a central market place, and the percentage targets set by the government determine the scarcity and hence the price level.

An example of such a mechanism is in Poland, where the green certificate scheme was introduced in 2005 and has especially supported the growth of wind power capacity to around 6 GW at the end of 2019. Suppliers are obliged to obtain and submit green certificates to energy regulator URE equal to a certain percentage of their sales volume. Trading of green certificates takes place on TGE. Prices have varied quite a bit over the years, and are currently at 140 PLN/MWh (32 EUR/MWh).

Another example is Italy, where the system was introduced even earlier, in 2002, but replaced by other incentive schemes in 2016. A similar fate could not be avoided by the UK’s and Romanian schemes. In the EU to date, only Sweden (with Norway), Poland and Belgium have a fully working compliance mechanism for green electricity.

Compliance markets tend to be nationally organized and do not allow for transfer of certificates to or from other countries. This limits the liquidity in the market and makes the price development sensitive to the local weather conditions, individual renewable energy projects and changes in national legislation. Norway and Sweden are one of the few exceptions with a joint scheme of green certificates, called elcertificates or ElCerts. This technology-neutral scheme was introduced in Sweden in 2003, but joined by Norway in 2012. ElCert prices have followed a rollercoaster ride (figure 3). 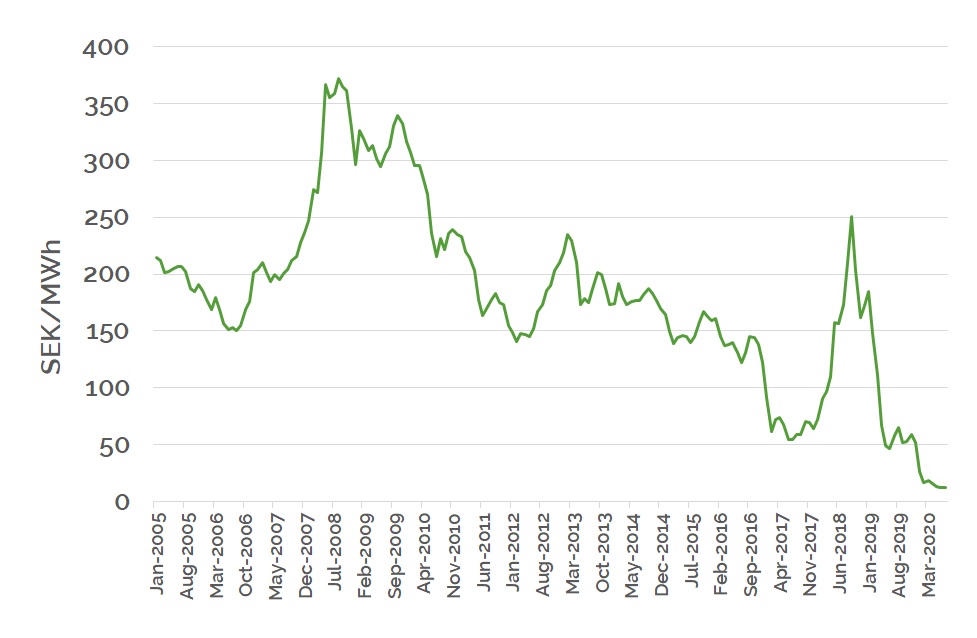 In the first years of the scheme prices reached levels of over 300 SEK, but are now close to 10 SEK per MWh (around 1 €/MWh). The low prices are due to a surplus of certificates in the market, a situation not expected to change before 2025. A low price in itself is not so bad, because it shows that environmental targets are being easily met. However, with very low prices, the market itself loses significance. Even the much larger EU-ETS system has had to be adjusted a few times to find the right balance between scarcity and oversupply.

The EU market for Guarantees of Origin

In most EU countries the purchase of green certificates is completely voluntary. The Renewable Energy Directive (original in 2009 and revised in 2018) defines that EU countries must accept each other’s certificates. Other European countries in the European Economic Area (EEA), such as Norway, have adopted the directive too and are hence part of the same market for (renewable) Guarantees of Origin. This has created a certificates market covering 25 countries. Each European country has appointed at least one organization for the registration of the GOs. The European Energy Certificate System (EECS) provides a basic ruleset for energy certificates for all energy carriers and several purposes. For electricity it has been operational for almost two decades, but now also includes other energy carriers such as heat, gas and hydrogen.

According to the Association of Issuing Bodies (AIB), in 2019 more than 30% of the electricity from renewable sources was thus certified, reaching a total volume of 600 TWh. The largest contribution to the supply of certificates has traditionally come from Norwegian hydro, followed by Spanish and Italian wind. Solar PV is much less present, mainly because a large part of the production is behind the meter or with relatively small capacities.

Demand comes from various countries in Europe, most notably Germany, Switzerland, the Nordic countries, the Netherlands, Spain and Italy. The Netherlands is an interesting example of demand-supply dynamics. It has a relatively high demand, a large part of which is for nationally generated (wind) power. Consumers, both households and corporates, are willing to pay a premium for locally produced green electricity. This high demand is reflected in the price for Dutch wind GOs (figure 4), much higher than for e.g. Norwegian hydro, which has generally been below 2 €/MWh and even below 1 €/MWh in the past two years. This diversity in price levels has been made possible by the reliable labelling of production, not only with ‘renewable’, but also the source and the country of production. 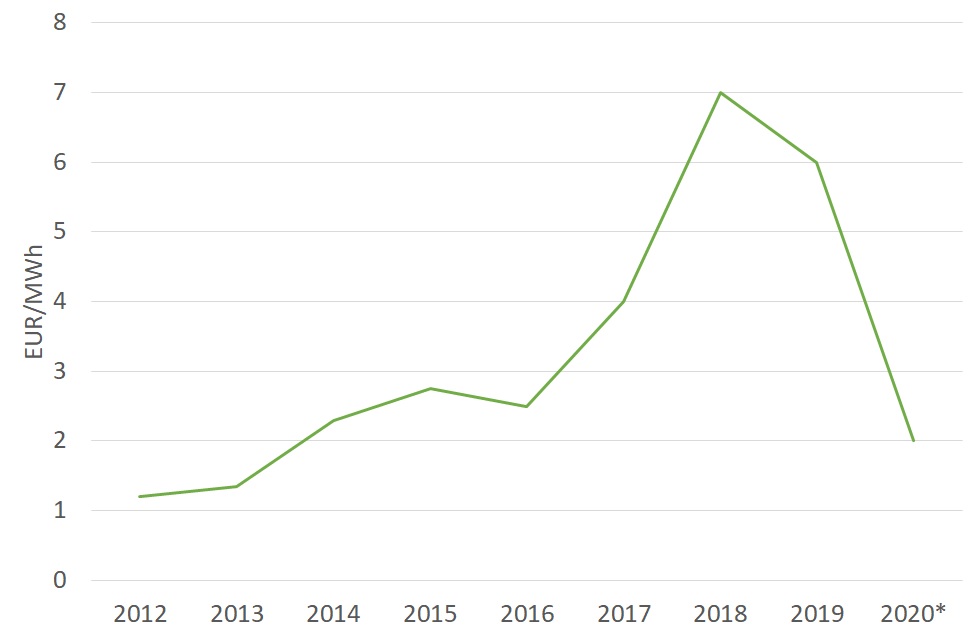 Limited liquidity and transparency in the GO market

There is no single market place for GOs and the market is not very transparent. Unlike power and gas, the few attempts to trade GOs on an exchange have failed. The trading is exclusively over-the-counter, with a handful of brokers acting as intermediary in most of the transactions. Apart from the newly established Green Power Hub, where bids and offers can be posted (though not transacted), pricing information is difficult to get. In combination with the low price levels, the lack of transparency and relatively high cost of transaction, are important hindrances in the further development of the GO trading market.

While in a few markets around the globe compliance schemes are still in use, most countries rely on other support mechanisms for renewable power. On top of these other support mechanisms, green certificates can still enhance the value of renewable power. Especially corporates are increasingly looking at ways in which they can reduce the impact of their own operations on the environment, both for reputational reasons and to gain a competitive edge in a society in which awareness and the importance of environmental impacts are ever increasing. At the same time, corporates must be aware that claims on sustainability of their electricity consumption are increasingly scrutinized. There is some public criticism to the claim of sustainability, which potentially reduces the value of voluntary green certificates.

The whole energy transition requires a lot of government funding and this is paid for in the form of taxes, energy levies and (indirectly) higher network fees. If US tech firms build large data centers in Europe, sign a PPA contract and take the credits from green power from wind and solar parks in the neighborhood, consumers and tax payers are likely to feel deceived.

Households and SME’s pay the bulk of the energy transition bill, and their views may be blocked by wind turbines or industrial-scale solar parks. Companies entering into green PPA’s should be aware that both points may reduce or even harm the reputation of the company. This in turn may lead to lower willingness to pay for green certificates.

The underlying question is whether the purchase of voluntary green certificates really supports the energy transition. Is it merely green-washing of grey production, and is it merely subsidizing existing renewable capacities (not additional)? The general answer is no, because the adoption of green certificates creates a higher demand for green energy. However, if end-users have no faith in this, they will not pay (much) for green certificates. It is helpful if the production can be seen with people’s own eyes, literally. Consumers tend to pay more for green power when it is produced nearby: if not at their own premises, then in their neighborhood. This idea of nearby green energy production is at the basis of many business concepts, such as peer-to-peer energy systems: through various types of market or matching mechanisms consumers buy directly from nearby producers. This rarely happens physically (in a micro-grid), but is more often an administrative matching. It has nevertheless been quite successful and raises the value associated with the electricity produced.

Another reason for public skepticism and hence a lower value of green certificates, is the timing discrepancy between production and consumption. When a data center or industrial production facility consumes baseload, whereas the production is not baseload at all, there is an apparent mismatch. So, the consumer of green energy is essentially consuming grey power in many hours. 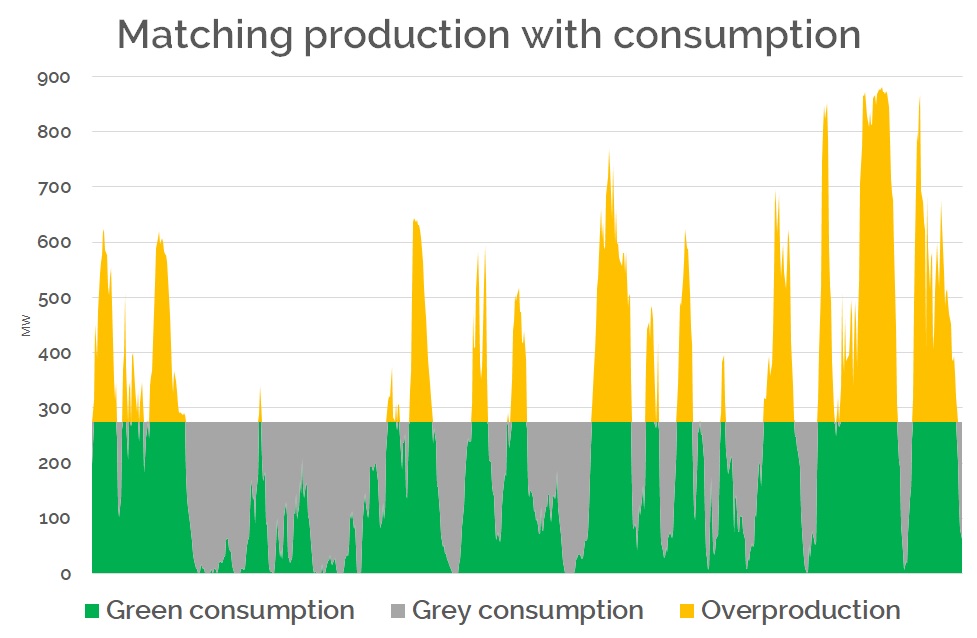 Figure 5: Hourly wind power production in a particular month, serving a flat consumption profile. Part of the consumption can be supplied by wind (green consumption), the other part not (grey consumption).

However, in some hours the production is lower or even zero, while in other hours it overshoots the consumption. On average, this production pattern matches only 63% of the actual hourly consumption. The remaining 37% has to come from other sources for a completely green consumption.

All of the above issues are related to the general challenges of the energy transition. Green electricity has the highest value if:

Green electricity sources which fulfil these conditions can be sold at the highest premium in the market. Only some of this is reflected in the current price differentials of the GO market in Europe. The different prices for different technologies, delivery years and market areas can be found on Greenpowerhub, a central market place for ElCerts and European GOs.

In the first 5 months of 2020, the GOs for delivery of green electricity in Northwest Europe in 2022 were roughly in the range of 0.30 to 1.00 €/MWh, with very little differences among technologies. Of course, at such GO price levels the market pays just a very minor premium for sustainability. Peer-to-peer energy systems, time-matching of production to consumption and other innovations are much needed to boost the value of green certificates in voluntary markets.

To read this article in pdf: Renewable energy certificates – the financials of renewable power and PPA contracts