In March 2022 the EU announced a directive to fill gas storages to at least 80% by 1 October 2022 to guarantee sufficient reserves going into the winter. The Dutch government made a reservation of more than Euro 600 million to cover the costs of filling the 45TWh of gas storage Bergermeer. Now that the filling season is over, it appears that state finances will actually see a big plus thanks to advantageous market developments and the smart scheme that was put in place.

In Spring this year, it was clear that Gazprom had not used its right to fill 40% of the Bergermeer storage, and neither was it expected that they would use this right for upcoming storage year. Furthermore, negative TTF summer-winter forward spreads did not give other market participants with Bergermeer capacity an incentive to fill up the other 60%. In the light of these developments, the Dutch government designed a scheme to guarantee filling of the Bergermeer storage. The scheme did not apply force on the Bergermeer owners (Taqa and EBN) or clients (a few dozen market players), but instead made the best use of market practices and skills of market players.

The first part of the scheme was a subsidy[1] with a budget of Euro 366 million. It provided an incentive to market players for filling up their contracted part of Bergermeer, including all unsold capacity. The subsidy amount was based on the realized differential between forward Q1-2023 prices and TTF spot prices from 13 June 2022 to 20 October 2022, the filling season. A negative price spread means that it is not economical to fill the storage with spot gas and sell the position during winter, a common storage optimization strategy. Market players participating in the subsidy scheme would receive a subsidy in case the average price spread minus a discount was negative during the filling season. No subsidy would be paid out in case the average net price spread would be positive. In return, market players would have to ensure that their part of the Bergermeer capacity was full by 1 November 2022.

The second part of the scheme mandated state entity EBN, in collaboration with Taqa, to fill any capacity not used by market participants (including Gazprom) up to 11TWh, for which the Dutch state allocated Euro 257 million. This mandate was increased[2] in early September 2022, so EBN could fill Bergermeer to the max. An additional Euro 210 million was reserved for this new mandate.

TTF gas prices initially went up to unprecedented high levels, with the front month contract peaking at almost 340 €/MWh on 24 August 2022. However, the prices did not stay this high for very long, and plummeted after this date (Figure 1). This was a direct result of the large LNG flow to Europe instead of Asia, a drop in gas demand, and the fact that many other storages were already full. 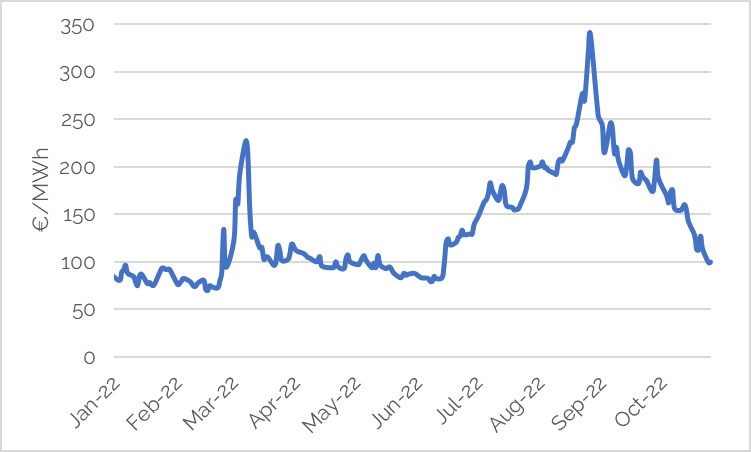 This drop in TTF prices was mainly affecting the front end of the curve. Further out periods, for example contracts for next winter, decreased less. This turned out very positive for the Bergermeer subsidy scheme. The spread between Q1-2023 and spot prices, which was the reference for the subsidy, hovered around zero up to mid August. From there on, the spread became very positive (Figure 2). This gave a high natural incentive for storage users to inject. In fact, the average realized spread over the filling period settled well above 15€/MWh. While market players made money on their trades to fill the storage, the subsidy was zero, and the Dutch state saved a sizable Euro 366 million.

KYOS consultants advised the Dutch government in the design of the scheme, and recommended to use this rolling spread as the basis for the subsidy scheme. First of all, this spread matched well with a logical trading strategy of storage users. Secondly, using an average was important to smooth out temporary market movements, and limit the impact of the scheme on the market. Furthermore, it was anticipated that the negative summer-winter forward spread in the first half of 2022 could not continue for a long time. With winter gas demand always well above summer demand, the negative forward spread was against all economic logic. It was mainly a result of the large trade volumes in the market to fill storages across Europe. As soon as storages would have filled up, large buy volumes (e.g. from Germany) would have left the market, and reduce the bullish price pressure in the spot market. Deriving the subsidy from a spread calculated over a longer time window was a decisive element for the scheme’s success. 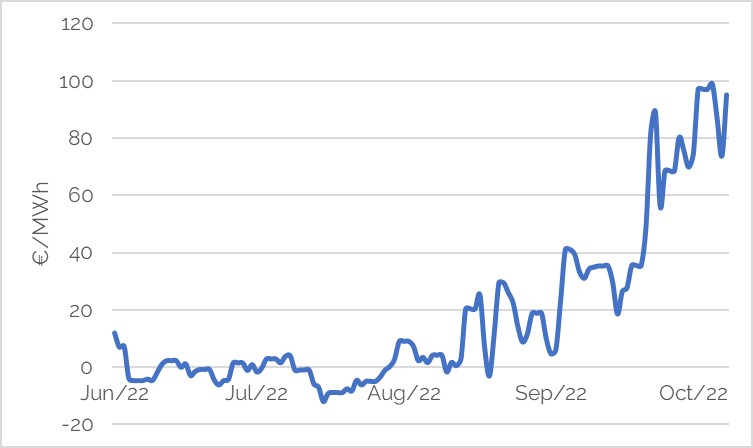 No subsidies necessary for Bergermeer

The second part of the scheme has been doing equally well. Although the exact filling strategy is not publicly known, one would expect that EBN is following a strategy that is closely mirroring the mechanism of the Dutch subsidy scheme. This would mean that EBN could have filled Bergermeer at a positive spread too. It is therefore very likely that the total Euro 467 million budget that was allocated to cover the costs of EBN filling up Bergermeer, has not been used. On the contrary, positive spreads will have generated a handsome profit to EBN and therefore the Dutch state. Assuming that a conservative 15TWh has been filled by EBN at an average spread of 10€/MWh this leaves a positive effect of Euro 150 million for the Dutch state.

To summarize, a total of Euro 833 million of subsidies was allocated to ensure filling of Bergermeer. In the end, no subsidy at all has to be paid out and the Dutch state can even expect a positive result from EBN filling the storage of at least Euro 150 million. This was partly luck due to the mild start of the winter and increases in LNG supply, but also partly anticipated during the scheme’s design. KYOS is proud to have been part of this joint effort with Dutch government officials, EBN and Taqa. Good news for Dutch tax payers!

KYOS Energy Analytics is a market leader in financial-analytical software and advisory services to energy market players and policy makers. With the KYOS Analytical Platform you have the right tools to value your gas storage, power plant, renewable assets or PPAs. In addition, we offer price forecasting services and a portfolio and risk management system. Our software models are extremely robust and give you the answers you need to make better decisions.

Our gas storage valuation and optimization models KyStore and KySwing support traders, portfolio and risk managers in natural gas markets. Inputs include market parameters, together with our own suggestions, forward curves and other parameters and settings. The model calculates the intrinsic value based on the forward curve and takes tradable products and bid/ask spreads into account. The software uses Monte Carlo simulations of spot and forward prices to provide the rolling intrinsic and option values.

KYOS’ solutions are used amongst a broad customer base, including the major players in the energy and commodity markets. www.kyos.com